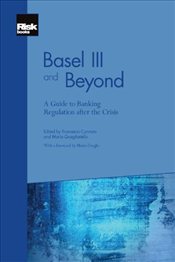 Basel III and Beyond

Drawing on expert contributions from those deeply and directly involved in the creation of the new global standards, Basel III and Beyond is a must-read for market practitioners and regulators who need to understand the emerging framework of financial regulation, its implications and impact. After three of the most tumultuous years in financial markets in living memory, the regulatory die was cast in December 2010. Issued by the Basel Committee on Banking Supervision, the Basel III standards on capital and liquidity, along with measures from July 2009 on trading book and structured finance, are the centrepiece of the regulatory community s response to the crisis. Slated for implementation from January 2013, Basel III must be fully phased in by January 2019. This book provides the reader with a comprehensive discussion of the contents of the regulatory reform, taking advantage of the knowledge of experts who contributed to shaping the new rules . With a foreword from Mario Draghi, Governor of Bank of Italy and Chairman of the Financial Stability Board and written by experts deeply involved in these reforms, Basel III and Beyond provides a practical and global perspective on the new standards. The book combines technical rigour with an accessible style to provide the essential primer to the new regulatory blueprint and the rationale behind it. Contributors include: Paul Collazos, Bank of England; Francesco Cannata, Bank of Italy; Mario Quagliariello and Andrea Enria, European Banking Authority; Gerarad Arqué, Isabel Argimon and Francesc Rodríguez, Bank of Spain; Laetitia Meneau, Banque de France; Lucio Rodrigues Capelletto and Paula Cristina Seixas de Oliveira, Central Bank of Brazil; Luca Giordano, Valerio Novembre and Neomisio Susi, Consob; Ulrich Krueger, Deutsche Bundesbank; Pedro Texeira and Patrizia Baudino, European Central Bank; Akhtarur Siddique, Office of the Comptroller of the Currency; Alan Adkins and David Rule, UK Financial Services Authority. The book is divided into four sections: Basel in the Shadow of the Crisis The first section focuses on the market practices that contributed to the financial turmoil and the subsequent policy response from the G20 and the Financial Stability Board that led to the proposals of the Basel Committee. The New Capital Standards The second analyses the new definition of regulatory capital, the new framework for the trading book, changes to counterparty credit risk capital rules, and the new measures for mitigating procyclicality. Complementing Capital Regulation Section three analyses the elements designed to complement the capital rules: the leverage ratio, a global minimum liquidity standard, initiatives regarding credit rating agencies; how to handle systemically important banks, and remuneration. The Emerging Regulatory Landscape The final section surveys the changed regulatory landscape, looking at crisis management and resolution, the impact of the new regulations, and the future architecture of financial supervision and regulation. The book speaks to the technical aspects and disciplines of modern markets and provides summaries of the most important elements, the thinking behind them, how they will be implemented and the potential repercussions. Basel III and Beyond is an essential resource for market participants, researchers, regulators, academics, law makers and governments worldwide.