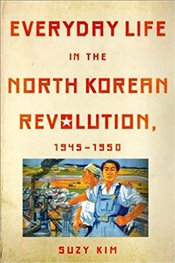 "Kim's work stays focused on various 'everyday' people as examples of how the North Korean revolution enabled regular peasants to build a new socialist modernity uniquely theirs. The author relies on oral histories and archival sources to bring these marginalized histories to light. Kim is well read across Korean, Russian, and Chinese sources as well as scholarship on North Korea. Her innovative approach is... a step forward from the typical Cold War approach.... Summing Up: Highly recommended."

"Concisely establishing the various lacunae and epistemological ossifications that hamstring studies of North Korea, this book makes a persuasive case for the significance of its subject. Kim argues that the everyday, especially in the formative years of the nation-state (1945–1950), posited a space for contestation, contingency, and construction by both state and society, which led to the formation of what she calls 'socialist modernity.'... Kim deftly mobilizes a range of materials, including statistics, photos, interviews, and official reports.... This is in many ways a pioneering work, the first analysis of North Korean social history in its formative years. Argued with finesse and supported by rich empirical research, it is undoubtedly an invaluable resource for all who are interested in the history of North Korea, everyday forms of socialism, and social history."

"Kim's book is a pioneering contribution to the articulation of a new paradigm. Putting it even more directly, she provides fresh, and often compelling, answers to a most fundamental question: How should the history of North Korea be written, especially in the aftermath of the Cold War? Suzy Kim has written an important book that deserves to be read widely by historians of North Korea, as well as by those of comparative communism and revolutionary processes."

"[On] the whole Kim's argument that the revolution was largely home-grown remains convincing. Especially fascinating are her chapters on the role of women in the revolution, and her exploration of the autobiographies that all adult North Koreans had to draft to show how their individual life stories fitted within the larger framework of Korea’s recent history and the revolution."