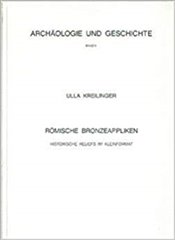 Garum And Salsamenta : Production And Commerce In Materia Medica

Garum and salsamenta means Fish Sauce and Salted Fish, in what I presume is Latin. To clear things up in the book, he often uses the Greek, (tarichos), in the Greek alphabet, and with no English translation. I finally printed out the Greek alphabet from some website, so that I at least could memorize some of the numerous Greek terms. A great deal of the footnotes are partially, often significantly, in Greek. The section on recipes - which I was all excited about - was all in Greek and Latin. It is done to the point that the value of the book is diminished, because you lose out on a lot of the footnotes, which I usually pay a fair amount of attention to, as well as some of the content (anyone out there know what a dolia is? Latin I think, for `wine vat.')

I would give it a five for coverage of subject matter, and the writing and conclusions are clear. The province-by-province section is thorough, although I would have liked a bit more on Palestine, and the probable trade and production from Tarichae/Magdala, a major fish salting town on the Sea of Galilee. However, it had fantastic quantities of information on the production process, which appears to have been similar the world over, as well as similar to modern-day methods in some areas. If you really want to know how fish were salted, here's your answer, complete with photographs and drawings.

The information on trade is sketchier, mostly because it's not available. He analyzes the pottery- amphorae- vessels that held salted fish or fish sauce, and determines trade primarily by their location found v. location marked. He also uses their labels to go into advertising methods, and discusses in detail one particularly enterprising man in Pompeii. There is also a well-done chapter on its medical uses throughout the Empire, mostly as recorded in Galen, Pliny, etc.

All in all, a well-done book that I'm downgrading to four stars for the quantity of foreign language. You can find other books in the series on the publishers site, although it's cheaper on Amazon.