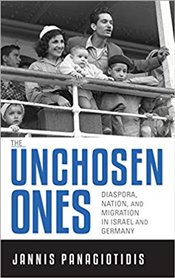 Unchosen Ones: Diaspora, Nation, And Migration In Israel And Germany (German Jewish Cultures)

A fascinating, original, well-researched, and persuasively argued work that places the phenomenon of migration in the context of the end of WWII, the Cold War, and the post-1989 world, and links it to the history of forms of migration that since the early twentieth century sought to disentangle societies in order to create homogenous nation-states.

(Sebastian Conrad, author of What Is Global History?)

Jannis Panagiotidis' thought provoking book compares Germany and Israel with regard to legislation and implementations concerning co-ethnic immigration. Analogies and differences between the two states are carefully analyzed showing how Israel a fascinating chapter of entangled history that questions the currently prevalent reading of ethno-cultural nationalism.

Through the lens of legislation and implementations concerning co-ethnic migrants Jannis Panagiotidis thought provoking book highlights the differences between the surprisingly similar states in this regard - Germany and Israel - telling a fascinating chapter of entangled history and questioning by doing so the prevalent reading of ethno-cultural nationalism.

An extraordinarily important contribution to scholarship that illuminates some of the key issues of twentieth-century citizenship, nationalism, and transnational history.

(Jan Plamper, author of The New We. Why Migration Is Not a Problem: A Different History of the Germans (in German))
Detaylı Bilgi ve Tanıtım